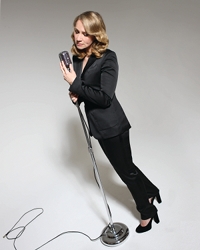 Singer Joan Osborne was born in Anchorage, KY, but it wasn’t until relocating to New York City in the early ’90s (to study at N.Y.U.’s film school) that she began to take a singing career seriously after singing Billie Holiday’s classic “God Bless the Child” at a local bar’s “open mic night.” In addition to Holiday, Osborne looked to such legendary vocalists as Etta James and Ray Charles as role models, as the up-and-coming singer decided not to cater to major record companies and formed her own label, Womanly Hips, which resulted in such releases as 1992’s in-concert Soul Show, among others.

But eventually, Osborne decided to sign on with a major label, Mercury, which in turn issued the singer’s next release, ‘Relish,’ in March 1995. The album eventually racked up sales of three million copies and proved to have a long life, as almost a year after its initial release the track “One of Us” became a massive MTV and radio smash, camping out at the number-one spot on the U.S. singles chart for 2 weeks. Additionally, the singer managed to connect with a large and appreciative audience while touring as part of the 1997 edition of Sarah McLachlan’s Lilith Fair tour. Osborne received numerous Grammy nominations in both 1996 and 1997.

Bring It on Home is a collection of vintage blues, R&B and soul songs that make up the seventh album from the Grammy-nominated, multi-platinum artist. It’s an apt title—for Osborne, Bring It on Home marks a return to her musical roots.

Joan will bring Maplewoodstock to an end with an 8:00 pm Sunday night set.

Brother Joscephus and the Love Revolution

Winners of the Independent Music Awards “Best Live Performance” Category 2011, Brother Joscephus and the Love Revolution is on a mission to make the world a more righteous place. The two main visionaries of this 12-piece explosion of love – Brother Joscephus and his eccentric cohort, The Right Reverend Dean Dawg – dip heavily into a musical gumbo rich with old school soul, roots, classic rock stylings, New Orleans rhythms, and feel-good “secular gospel” music. BroJo combines all this with a message of righteousness, urging us towards acceptance and loving one another.  When you combine the music and the message with a one-of-a-kind, high-energy stage spectacle, you got yourself one hell of a revolution on your hands. Their brand new album, Revolution of Love, was entirely funded by fans through Kickstarter.com, and is slated for a June 4 release.

Brother Joscephus will bring Day One of Maplewoodstock 2013 to a close with a 9:30 pm Saturday night set.

The word “Americana” gets tossed around rather loosely these days; it can mean anything from a hipster with a recently-discovered acoustic guitar to a decades-long denizen of the Grand Ole Opry. But when you set aside the Johnny-come-rootly types from the real deal, it’s a sure bet that you’re going to stray into Iguana territory. Based out of New Orleans for the past couple of decades – save for a short, Katrina-imposed exile in Austin – the Iguanas define a sound of Americana that crosses cultures, styles, eras… and even languages.

Their latest album, Sin to Sin, is their first studio recording since 2008’s If You Should Ever Fall on Hard Times, and its release coincides with their appearance at the New Orleans Jazz & Heritage Festival.

The Iguanas will help bring Maplewoodstock to a crescendo with an 8:00 pm Saturday night set right before final Day One act Brother Joscephus and the Love Revolution.

» Read more about The Iguanas at http://www.iguanas.com

Read our full Day One and Day Two line-ups!

Our headliners and featured acts.